What If for Outpost

This Page is for the wild ideas we all have.

What do we want to do next? Phase 2 Outpost

An idea to reduce the volume of the payload

Paul 05:17, 12 December 2009 (UTC) - I would like to see a floor plan that is sausage shaped, all inflatable, and designed for microgravity use. It would only need two locks, (They may need to be something that can dock to an ISS standard dock.) and a small suit prep room. It would be used for space travel, sort of like a cheap ship for a Near Earth Object (NEO) mission. (Call it 120 days habitation for four people.) with two weeks on the "surface" where it may be tethered (or at least in orbit around).

When we are done with it, we could use it as a ship to transfer from Earth to Luna for the tourists. (Kind of like a powered cycler.)

[User:Len|Len]] 10:06 February 10, 2010 - If the Inflatable were to be filled with expanding foam the overall strength would improve as would the ability to repair hull breaches without the worry of the hull collapsing. On the flip side, hull fabric would be more susceptible to penetration by hard or sharp edges it would not flex (in the event of accidental contact) as would a gas filled hull. 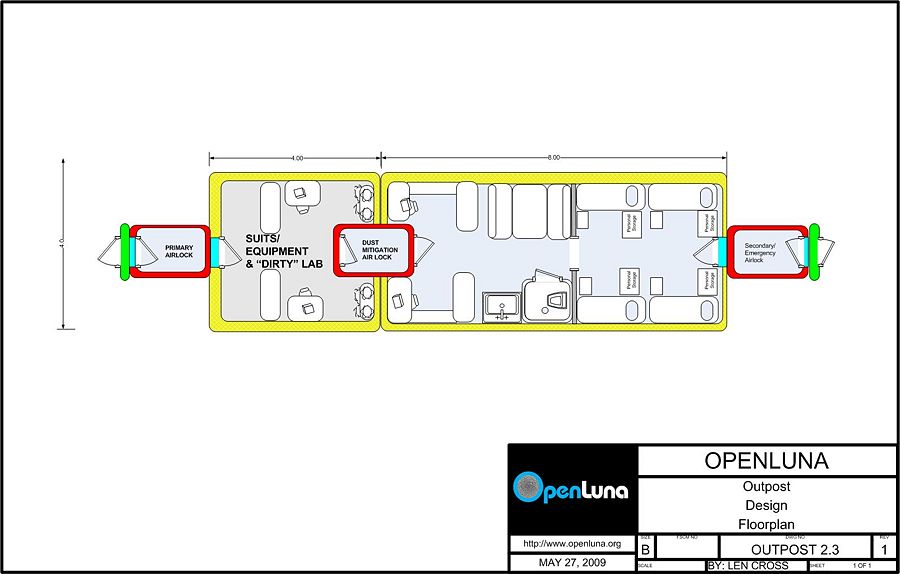 An alternate floor plan. From Len 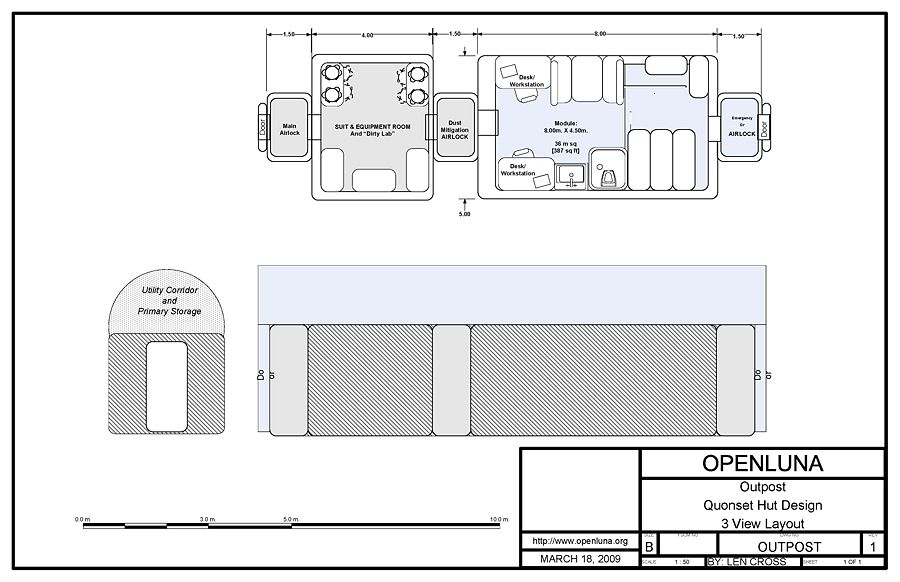 Navigaiter I love Quonsets! There's a reason they were shipped all over the world for wartime spaces. That's why I wonder what is the rationale for the "inflatable" hab idea? Besides light weight, I mean.

Note that the airlock between rooms can and perhaps should be just an airtight door since it is a redundant airlock and ther'll never be vacuum on one side of it since it isn't an exit door.

- Well - It's possible to have a vacuum in the Dirty Lab, if they needed to have the lock completely open to get something big in it, (Like a stretcher or a bad piece of larger hardware for repair.) or shovelling a bunch of material in or out. Also, We really wanted a small room to be sealed for a last vacuum cleaning (dust removal) before entering the living quarters.

Size and weight. The Quonsets shape is being considered because of the strength to height ratio. Please look around and make more suggestions or help us detail this. We are wanting to move to a first stage analogue soon. Paul 01:09, 26 June 2009 (UTC)

Lighter simpler and easier. Granted in spades. Yeah but... I'm starting to worry about the response of an inflatable structure to having tons of regolith dumped on it. ?? [3-meter cosmic shielding]

I kinda like the alternate idea of bolting two Quonset Huts bottom-to-bottom to make one cylinder. ?? Darn. I'm sorry. But. A buried hab will flex, won't it, when pressure variations and temperature fluctuations occur? Seems like this'll stress a fabric hab skin faster than an aluminum alloy Quonset. ?? Navigaiter

Navigaiter Anyway -- to discuss my revisions to the outpost drawing by Len, which I fundamentally change his multi-room outpost idea into a tiny first-habitation lunar lodge (discussion branches off here) type of structure. They are just beginnings, please discuss and revise them.

The hab is inflatable. Much as I love Quonsets, they require a big heavy rigid floor because their internal pressure will try to blow the panel arches upward from the edges of the floor. This force also requires an unbendable floor and strong angle beams along the baseplate joining arches to floor. After the LunaCrete Factory is up and running and pouring slabs for Quonset huts, they will become the hab of choice. The hab endcaps are round for the same reason as the "floor" is round; joing a flat surface to a round surface creates a corner with huge bending force, ie, structural failure points which require strong angle beam reinforcement with a lot of joiner bolts. Can't afford the assembly time and can't risk the pressure leakage which WILL happen after the structure comes alive and flexes with pressure and temperature changes. And, of coarse, end caps are round because the hab has to be inflatable and you can't make a balloon with corners ;-] The hab has just one airlock. If the airlock doors fail, the crew must seek refuge in their Suits and/or in their Lander, mission will be compromised. Sorry. Airlocks are too big and heavy to afford redundancy. LunaDust is highly abrasive and hates hinges, these things MUST be perfectly sealed or the airlocks are soon doomed. So, the one airlock must be large enough for the five[?] crew to pile when the hab looses pressure. Being buried under tons of regolith is scary.

If there's anything almost as good as exploring Luna, it's talking about it. [:-) Speak up. [Allen Meece]

snyder] I'm not quite convinced. Airlocks can be built for different uses. An emergency airlock can have a pretty simple door mechanism and austere furnishings. Think about how a dry bag seals against water. (multiple folds and finally a clip to hold it shut) I don't think this is the design you want for daily use, but occasional would be fine. Also the bigger an airlock is, then the more gasses you will need to pump out for depressurisation. Since you never get it all, you will also lose more when you finally open the door. (look at the Space shuttle's N2 use for EVAs)

Len One airlock presents a set of problems, first and foremost is saftey. One way in and one way out could be very problematic. Second is dust mitigation, with the dust as fine and as abrasive as I have been led to believe, one set of filters and one vacuum draw down does not seem to be enough to minimize the appearance of dust in the living/work areas. One airlock also does not provide for easy expansion. The 3 airlock design would include a drawn down system for each with a centralized piping system that would allow each pump to be ganged with the others. This of course would provide redundancy and improve the draw down wait time by using all three pumps at once.

Hi Len, nice to meet you here in the hab shop!

Safety... One door is simpler than three and simpler is automatically safer. Less to ship, assemble and maintain, less to go wrong. If the hab loses pressure, the one airlock must be big enough to hold all five crew. That airlock has to be robust with dust-proof hinges and latches like on a submarine. Consider the submarine. They don't have extra doors because they don't allow bad doors since that could kill everyone on board. Doors can be made perfectly. The technology is perfected. Certain parts of any space project are Level One Importance, things which cannot be permitted to be chancey, things like wings on the shuttle, or its windshield, or its solid rockets, say. A single door on the hab would have to be the same priority. If the door fails, like the shuttle solids failed, people may die. Perfection isn't perfect and we have to live with that. [pun] Navigaiter 18:59, 4 July 2009 (UTC)Two things that could prevent access to the front foyer, a fire in that end of the hab and a roof blowout/cave-in. Keeping the doorlock area clear of everything, not just flammables, is job one. Since air pressure is all that's holding up the ceiling, a blowout would drop the roof on the entire hab. Game over. Navigaiter

NavigaiterThis topic moved to its own new page to reduce clutter here. 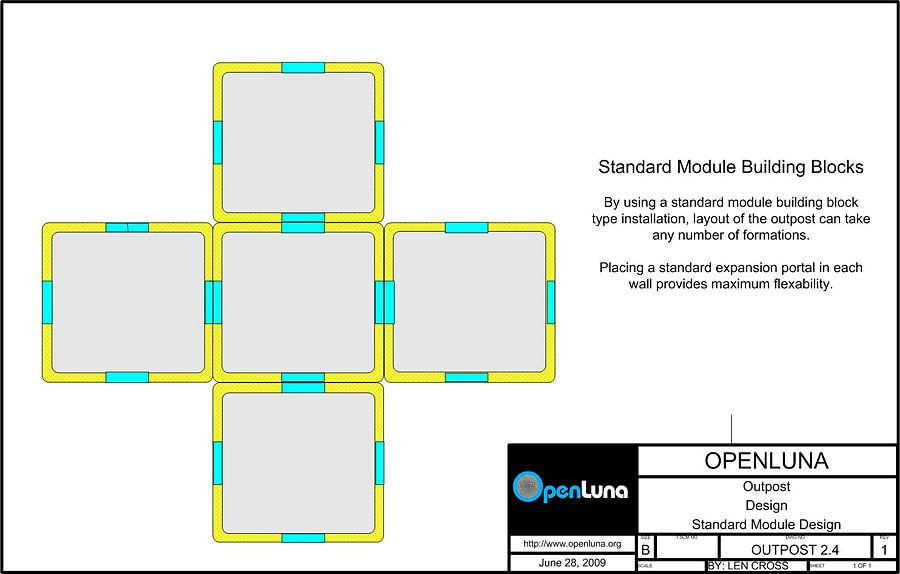 A proposal for the use of std construction modules Len.

Len: Using standard construction modules would cut down on design and manufacturing costs and provide the flexibility to rearrange the Outpost layout according to the terrain.

Navigaiter: This is brilliant. All doors and door frames are standardized for the same reason.

Len: The more we can standardize (and off the shelf rocks) the lower the mission costs will be.

snyder] I think all Habs are 'inflatable' in a sense. Even an ISS module expands a little when pressurized. Think about using spheres and cylinders because of hoop stress. Internal fittings can make flat floors much easier than making a flat pressure vessile. The loads are really large. consider between 3 and 15 pounds of force for EVERY square inch. As for the loading of soil from above, lets see .... call regolith density say 0.20 lbs / cubic inch (I dunno, steel is about 0.35), and lunar gravity is 1/6 gee. so 5 feet of regolith on top of a hab weighs about 1 lb. not much compared with the internal pressure pushing out.

OK, thanks for the numbers. But the regolith cover is >3 meters thick, or 9' or nearly twice that weight or two 2 lbs per square inch on the top curve. Not a lot but it should pack down with hab vibes and put wear on the inflatable fabric. A show stopper for inflatables or just something to think about when considering the habskin? Stress lines and stretch marks?. Navigaiter 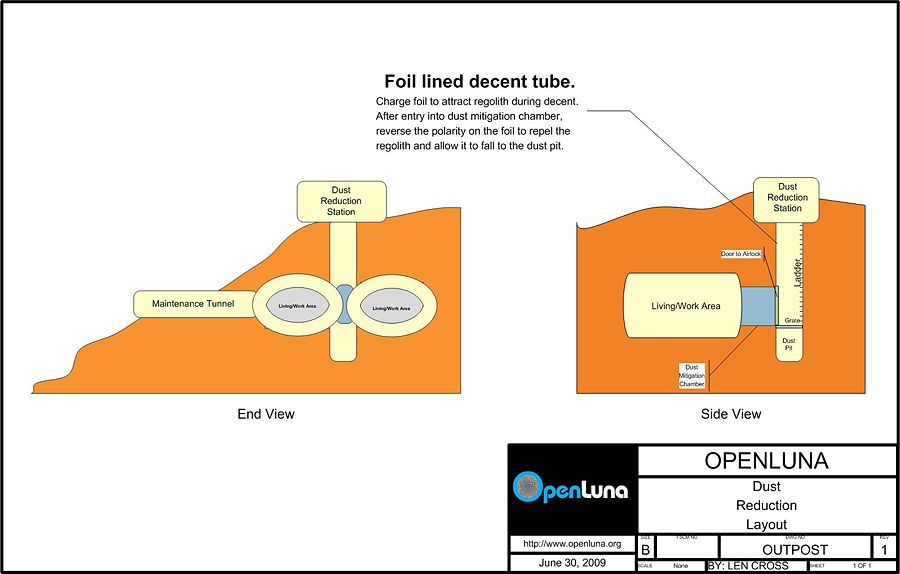 A proposal for the reduction of dust. The style of the living/work area is arbitrary and shown only for reference.Len.

Len 04:28, 1 July 2009 (UTC) Assuming that there is a charge inherent to fine grain surface regolith, would it be possible to use a foil lined decent tube to attract it by placing a reverse charge on the foil. After exiting the tube the charge could be reversed repelling the regolith from the foil and allowing it to fall into a collection pit.

Navigaiter 18:59, 4 July 2009 (UTC) It may be that the de-duster has to touch the dust to ground it out, de-ionize it, and that means the tube would need to be chock full of bristles. ?? If so, since LunarGrav is only one eigth that of earth, the Mooney can't fall hard and could just drop down, pull himself down, through a tube of bristles. And maybe include a gas blower, CO2 perhaps.Navigaiter

Using the suit room as a "dirty lab"

for studying lunar regolith and rocks

[--Navigaiter 18:59, 4 July 2009 (UTC)This idea is for the two-roomed hab version. I moved this paragraph down from the headline top of the page because habitation images make the top look better and because this idea of a big dirty lab is less appropriate than using a fume hood in a clean hab. See RegoDust control.]

An alternate possibility for the Outpost 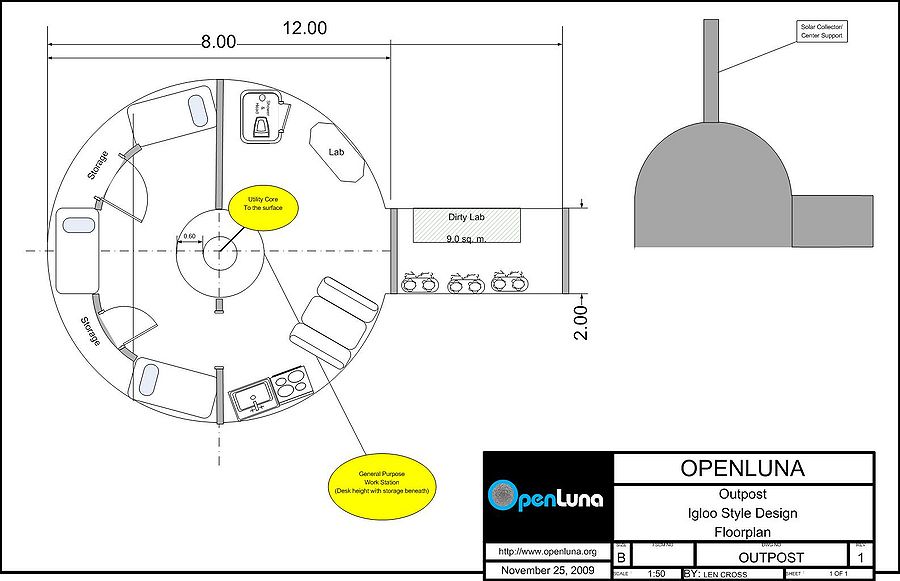 Len 29 November, 2009 An 8 meter dia igloo provides approximately 50 square meters of floor space. The center column could contain a light tube to bring sunlight from the surface to solar panels under the circular work surface. An outer shell for the center column would serve as a center support for the dome.

Navigaiter 01:48, 8 December 2009 (UTC) This round hab feels good. I'm looking forward to seeing how you prefer to attach the floor. I think it should just mirror the roof for simplicity and faster construction. How are the dome ends attached to the cylinder walls? An advantage is that this could be made from nasa external H2 tanks. We all know how eager nasa is to help the civilian space program. [not]