Navigaiter 22:28, 4 July 2009 (UTC) I believe OpenLuna should establish its first Outpost and a MoonBase for Tourists inside

Copernicus, Where to Land the TOURISTS for awesome photoshoots! (Foreshortened image, the far wall is actually 56 miles distant) 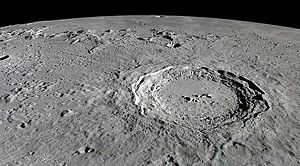 I'm going to bring the discussion in here. Thank you for your thoughts. Also, please, if you see an obvious mistake, please feel free to correct it. If it turns out you were wrong, we can always back it out.

Just a note: The lander team is currently planning a direct landing and ascent. No orbital materials required, but we were planning on polar orbital (solar sail "powered" possibly) comm satellites. One per launch until we have a low powered link from anywhere on the surface to "Home".

okay, There seems to be some confusion over astrodynamics of earth-moon and landings. 1) We are not going to fly to the moon. It is cheaper (slower) to fly to the Earth Moon L1 point. I forget what the travel time will be, but the O2 is less than the saved propellants.

2) Any earth orbit lines up at least twice a month to get us there. (orbital planes cross at two points) orbits also precess due to the earth pear shape, but we digress...

I'll try to dig up some old sims for the Earth-moon system, including some circa 1990 animations.

If we are focusing on the tourist we should consider being close enough to the Apollo 11 landing site that we can offer an excursion (for extra money like the cruise liners do) so our guests can see mankind's first footprints on the moon, etc. Thecomputist