The first part of constructing the surface suit will be development through analogue testing in relevant environments.

We are making our decisions based on certain design concerns

We are working under the thought that the suit needs to be as light as possible, but be completely self-sufficient. Consumables will need to be swappable while wearing the suit. (Remember, the first four will spend two to four weeks in it, and the follow on missions may need to spend 3-4 days in them.) We do not intend to significantly change the suits unless a dramatic change is made to the state of the art.

This suit is expected be of a MCP/HUT hybrid; although a HUT/soft suit in the style of the University of North Dakota NDX-2 is also being considered. The wearer will wear a coverall over the suit body for armour, heating, or dust mitigation. in future versions, these coveralls will be interchangeable. The helmet will be fixed to the HUT, with several flat planes for view plates. The rational behind flat plates is in ease of spares storage, ease of repair, and ease of polishing/maintenance. The PLSS(Portable Life Support System), HUT, and helmet will also be integrated. The HUT will be entered from the front. Since the view plate is not hemispherical, the view plates will contain electronically polarizing elements for sun mitigation. There will be two water delivery nipples as described elsewhere, as well as two food delivery nipples, one for a savory food, one for a sweet food. Local communications will be handled via a routable VoIP protocol over a WiFi variant, via a computer as described above. This is basically an always on system that would be the equivalent of talking to the people in your immediate area. This entire system will contain redundancies. Long distance communication could be over amateur radio. The suit will be constructed from firm elastic cloth and laced to tension using a speed lace style system. The helmet will also have redundant lights and cameras.

Boots are expected to be near off the shelf Canadian Pack Boots. Gloves should be modeled as close as posslble to suit gloves, and made in the same lace-up MCP style as the suit pressure layer. There is a spiked traction system being developed by Kepler Shipyards that will be integrated into the boots. 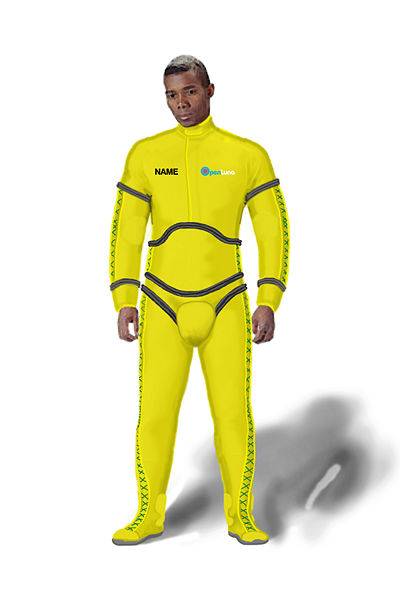 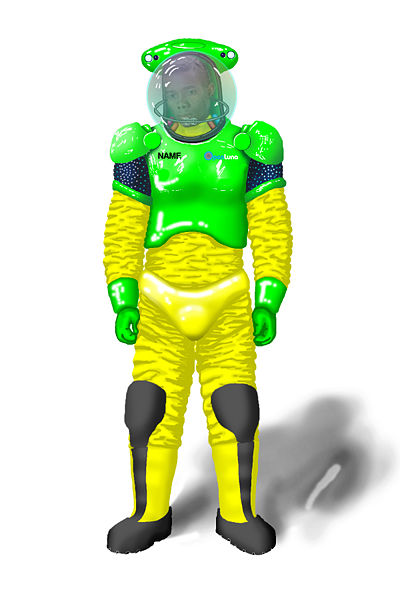 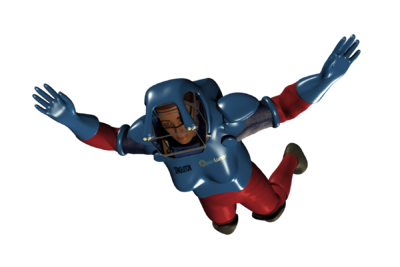 Female Explorer returning to Earth in suit, in the free-fall stage. 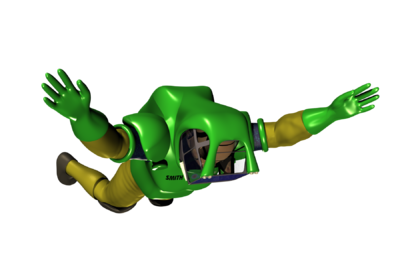 Male Explorer returning to Earth in suit, in the free-fall stage.

The suit described above will be skin tight with laced seams on the sides. there will be small metal or plastic clips on the lace points. The color should be pleasing. the laces will be stainless or spectra. The HUT will basically cover the ribcage, like a short vest. The helmet is attached to the top, the PLSS and helmet are integral. The PLSS will extend down halfway to the waist and will be about 40 cm thick, as wide as the back, and up to the top of the shoulders. There will be a heavy solid connection between the back of the helmet and the PLSS. Note the faceplate panes from above. The armour coveralls will be looser, but not very over the suit, and will have several straps and clips to keep the knee, elbow, shin, forearm and thigh pads in place. The colour will be a combination of lime Hi-Vis green and some other artistic, attractive design.

Think a combination of "Red Planet" surface suits for the body, Cary-Ann Moss's helmet (but flat planes, not curved.) and the color and style of "Iron Man".

They come stock with the pressure liner. (Both the hard shell one, and the "Modesty cover")